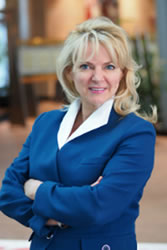 As an Assistant Auditor General in BC she led national initiatives for Auditors General, including serving as Chair of the Auditor General National Performance Audit Conference and leading the National Audit Learning Network collaboration.

Beverly’s leadership in senior executive BC Government positions resulted in her receiving several high-profile leadership awards including awards from the Premier for ‘Service Excellence’ and ‘Organizational Transformation.’ Beverly also served as a senior reviewer of public complaints against the RCMP and worked with the National Defence Ombudsman in Ottawa.

Beverly is a Chartered Professional Accountant (CPA, CMA) and has received recognition for providing extraordinary service to the CMA profession. She is a non-practicing lawyer and holds a Juris Doctor and a Bachelor of Business Administration degree. She has completed the Director’s Education Program at the University of Toronto’s Rotman School of Management. She has received her Institute of Corporate Directors designation (ICD.D) and is Certified in Financial Forensics (CFF).

Beverly is a coal miner’s daughter from Cape Breton.